Back in the long ago, we discussed Eclipso: The Darkness Within #1.  What a lot of folks might remember best about that book is that it had a crazy gem glued to it… which could cause some havoc for whatever book that sits before it in your longbox.


Today we’ve got something a bit less heinous… it’s a lenticular POG.  Were POGs still a fad in 1997, or is this just another example of DC being “with” the times?

We open with a man who just realized he could fly.  He found out as he dove in front of some children to stop them from being riddled with holes from a drive-by shooting.  This, as you might imagine, causes our man to take the incoming fire himself.  He falls from the overpass and into the junkyard below… as he plummets, his life flashes before his eyes.  When he lands, however… he’s alive?!

Without much of a clue as to who he is… our man checks his surroundings.  Around him are the first issues of (Tales Calculated to Drive You) MAD and Action Comics… but he’s not interested in any of that… what catches his attention is a Betty Boop snow globe.  Now, Betty Boop has always kinda freaked me out… so, if it were me… I’d already be in the next county.  Our man however, has another flashback triggered.

He enters into nearby Crucible City… and tries to find a library.  He’s summarily kicked out for being a transient.  A librarian named Irma pulls him aside and tells him to come back that evening… and he does!  Together, they learn that he was a lawyer named Mitchell Shelley… and he’d been reported dead, victim of a gas main explosion.  He also finds out that he’s married, which puts a crimp in whatever plans he might’ve had for lovely Ms. Irma.

Nearby, we meet a man with painted nails as he washes up in a rest stop bathroom.  He’s hitchhiking toward Crucible City… and, oh yeah, he’s killing everybody who gives him a ride.

Back in the city, Irma has taken Mitch to her night job… lucky for him, she works at the Eisner/Igor Mission… or something.  Mitch gets cleaned up and fed… and learns why Irma has been so kind to him.  Turns out her son went missing a few years back, and she’d like to think that somebody out there has shown him kindness.

Then… the Body Doubles show up!  They ride over in a cringe-tasticly gaudy SUV… and they’re on the hunt for their “John”.  The blonde Body Double looks to be quite the Shawn Michaels fan.  The brunette exits the day-glo boogievan, and heads inside the Mission.

They are, of course, looking for Mitch.  He and Irma split out the back door… while the brunette starts slaughtering everyone who gets in her way.  Outside, the blonde wastes no time in filling Irma full’a holes.  She’s dead… and Mitch (guilty conscience and all) takes off into the night… well, not before exhibiting some new “hardened air” powers.  But, then… he takes off.

Going all the way to Scooters Gas Farm… where stories of the “Resurrection Man” who saved those kids from the drive-by shooting are being shared.  Just then, a fuel hauling truck careens into the gas pumps outside.

Without thinking, Mitch rushes outside… and holds his hand up to the truck… and, it stops!

He nyoinks the driver out of the seat and carries him to safety, before…

Days later, we return to Scooters… and people are being questioned about the strange hero.  We learn that it’s the Body Doubles asking the questions… and they’re eventually taken to the morgue, where they discover… nothing!  Three days later, and the tomb is empty!

We wrap up by rejoining Mitch… now exhibiting some fire-related powers, as he exits Crucible City.

This was pretty great!  Maybe I’m just a sucker for “on the run” stories… and amnesia stories… but, I thought this was a lot of fun.


The action is pretty hot and heavy here… as we see our man “die” twice… with mention of a third time.  I don’t think this will (or should) be the pace going forward… but it serves its purpose here in establishing just what this Resurrection Man is all about.  Each time he “dies” he receives a new power.  The first time, in the gas main explosion… he got, flight.  After the drive-by, he got that hardened-air gimmick… and after the tanker explosion, he got one’a those Stan Laurel thumb-lighters.

Can’t go wrong with that!


We meet Mitch’s main (as far as we know) baddies in the Body Doubles… but we don’t really know what they’re all about just yet.  That’s all fair enough… at this point, all we need to know is that they’re bad… and they’re on his tail.  There’s also the hitchhiker with the weird voice balloons… but, we know even less about him.


Irma’s death kinda came out of nowhere… though, he did split before we got any sort of confirmation that she did, in fact, die.  Also, since she mentioned her son Robbie, who had disappeared years earlier… it’s not out of the realm of possibility that he and Mitch might eventually cross paths.


Art here was excellent.  I feel like I have this odd reaction whenever I see Guice’s name on a project, and I’m not sure why… I always imagine it’ll look like a kinda ho-hum 1980’s fill-in… but, this was really anything but.  Really good stuff here, I thought.


Overall… I’d say this is definitely worth a gander.  Unfortunately, this is one of those books that doesn’t show up all that often in my neck of the woods… and my collection is, as far as I can remember, only this issue… and I nabbed it like a decade ago!  Never tried The New-52! version either… though, I might need to.  This issue (and series) is available digitally… just be warned, the only way to get that bad-ass lenticular POG is by grabbing the actual issue! 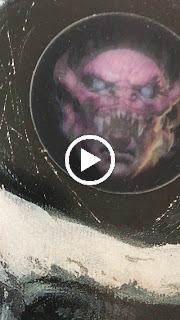