Gather ’round friends, it’s time for a scary story.  Picture it, there’s a young-ish man who makes daily “discussion and review” posts about some silly thing or another… and lately, it would appear that he’s been trapped in within the dullest of subjects.


With sweat on his brow, he thinks to himself, “it’s okay… there are only two days left.”  Slump-shouldered, he reluctantly ventures into the cardboard metropolis that he’d allowed his front room to become… and reaches in for his next taste of his medicine, which would be bitter… if it weren’t so dull.


The number 42 flashes before him… but that’s not the story.  Behind #42 features a familiar “brand”… the Brightest Day continues?


Fingers trembling, he gets a closer look at #43… and sees the four words that will forever be imprinted on his soul…

So yeah… we went from a five-part story… to a seven-part one, counting the prelude issues… to now, an eight-part story!  Remember, that “decompressed” storytelling?  All in our heads, friends.  Doesn’t exist.

We open with Kyle Rayner… and he’s already singing a very different tune.  Remember how we wrapped up with him saying he was there to kill Alan Scott?  Well, now he’s claiming that that’s only a “last measure”.  That’s how real people talk, right?  Fly in, threaten to kill a guy… then be all “whoa, whoa… why are you all freaking out?”.  Panicked, Jennie decides to take Obsidian’s hand… and really, at this point, can we even blame her?

The heroes are suddenly surrounded by constructs… and then, well…

From here, (stop me if you heard this one) there are several pages of heroes fighting constructs.  Worth noting, Kyle’s ring seems to be getting sapped of energy with the quickness.

We shift scenes to rejoin Dr. Mid-Nite and Mikaal.  They get a page of hot walking-down-a-hallway action, before the former leaves the latter in order to find help.

Next stop, the throne room.  Faust continues to prove that he’s one of the more annoying characters around as he prods Starheart about his powers.  It’s riveting stuff.  It’s confirmed that Dr. Fate is the one keeping them bound, which I thought we’d already known.  Anyhoo, Dr. Mid-Nite sneaks up behind Fate, and removes his helmet.  This frees the captives.  In the confusion, Jay nyoinks the Starheart from Alan’s hand.  Wildcat hauls off and socks Alan… causing him to shatter into teeny tiny green pieces. 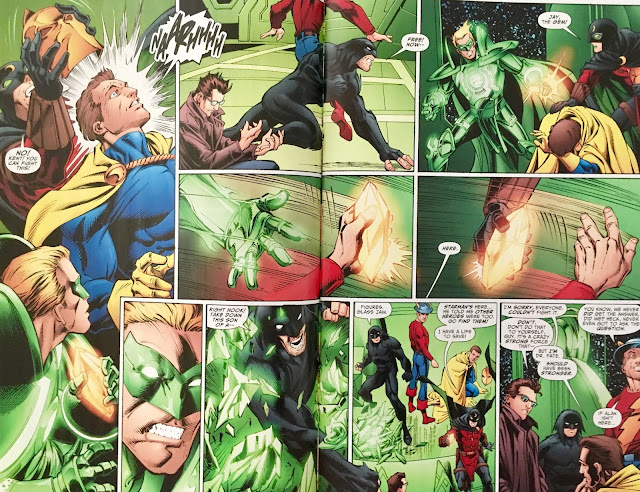 So, where’s the real Alan Scott?  Well, he’s on Earth fighting Girls’ Super and Power.  He’s having a great time experiencing pain for the first time.  It’s a twisted idea, that would be fun… if it wasn’t wrapped in so much boredom.  Power Girl is then “affected” again… and starts to fight Supergirl… again.  Is Vince Russo booking this?  Do we really need to waste more pages at this point?!  Karen manages to fight off the possession… and Alan Scott vamooses.

We shift scenes back to the big ol’ group of heroes… and they’re, c’mon… fighting an army of constructs.  Still… for pages and pages.  Kyle’s ring is still being sapped.  They are eventually joined by Dr. Fate and the formerly captive heroes (and Faust).  We wrap up with Alan Scott arriving… again.


I haven’t felt like this since we covered Millennium all those months ago.  This is just such a boring story… and, if we look at it… it has no right to be!  I mean, by all accounts this ought to be an action-packed JLA/JSA romp.  Instead we get a story that would struggle to stay interesting if it were only an over-sized Annual.


We find out last issue’s cliffhanger was a bit of a bait-and-switch.  Nothing really new about something like that, I guess.  You’d figure with Jennie and Kyle’s (and Donna’s, even) past, there’d be a bit more drama here… but no, it’s all very surface level.  Just a couple of “I loved you”s… which is kinda lame… and kind of a missed opportunity.


I guess I’ll just put it plainly.  This arc is unfun, and if not for the Bagley art… I’d tell ya it has no reason to exist… or occupy any space in your comics library.  It’s repetitive… the pacing (and stakes) are all over the place.  Just a mess that insists on taking up as much space as possible.


I feel like we’ve reached the point of no return… so, we kinda have to finish it up… right?  I mean, we’ve come so far.  Ehh, I guess we’ll see how I’m feeling after I read the next chapter.