I’ve said it time and again… if you ever start your pitch with “Wouldn’t it be funny if…” you’ve got a stinker on your hands.  Well… maybe I’d forgotten about the little ditty we’re going to discuss today.  Because, we’re about to learn when Peter David asks “Wouldn’t it be funny if Spider-Man went to the suburbs… where there are no tall buildings to swing from?”, the answer is most definitely… Yes!


But first, I wanna thank everyone for their comments… and, again apologize for my lack of interaction.  Been a hectic-er than usual week with school and content-creation… I’ll hopefully be more chatty very soon!

We open with Spidey bein’ all sullen-like, sticking on to a building, wallowing in some recent misfortune.  That’s… kinda one of the things he does.  His thought process is interrupted by the arrival of the Human Torch, with whom he shares a little bit of small-talk… and accidentally happens across some topless-rooftop-sunbathers.  After chatting for a bit before Peter decides he’s just going to call it a night.  They part company, and Spidey spies a fella in a nearby boutique who looks like he’s about to loot the place.

Our man swoops in to get a better look, and sure ’nuff this dude has designs on robbin’ the joint.  Upon seeing Spidey, the baddie grabs a nearby mannequin, and threatens to shoot it.  Well, this must be one life-like dummy, because Spider-Man buys it!  Not helping matters is the fact that the mannequin actually looks a bit freaked out… almost like it knows it’s been taken hostage!  Ehh, maybe I’m just seein’ things… Whatever the case, the would-be robber gives Spidey the slip with this subterfuge, and flees down into the subway.

Our thief hops the turn-styles and quickly goes to hop on board a train.  Spidey follows, but is stopped by the police.  Ya see, this is still early yet in the Black Costume Saga, and New York’s Finest aren’t quite sure what to make of this “new” vigilante.  Before he’s able to get on the Grand Central-bound train, Spider-Man does manage to toss a Spider-Tracer onto the bad-guy’s back.

We jump ahead to later that night.  Both Spider-Man and Ron (the bad guy) arrive at their respective homes.  Peter, naturally is at his New York City apartment, while Ron lives wayyy out in da burbs.  Pete watches (I’m assuming) Dallas all by his lonesome, while Ron dines and sleeps with his wife.

The following morning, Peter gets up, has breakfast, and heads out on the town in hopes of tracking down his Spider-Tracer… and, also… the bad guy.  Ron sleeps in.  Looks like he’s not going to work in the City today.  Worth noting, Peter has cereal with milk.  Nothing weird about that, right?  Only thing is, the quickest way to make me sick… to make me gag… is to see someone eating cereal and milk.  There is really nothing more disgusting to me.  Just the thought of soggy cereal, and discolored milk… and, and… and… when the cereal’s gone, and whoever’s eating it kinda tips the bowl into their mouth to finish the rest of the milk?  Ugh… you can’t see it, but I’m fighting off the urge to gag as I type this!

Anyhoo, Spidey (in his red-and-blues) spends the better part of the day trying to trace the tracer… but, is coming up short.  He eventually deduces that this feller probably ain’t in the City… and so, he heads back to his pad to pick up his Tracer-Tracer Gimmick, to amplify the signal… which places him atop a train bound for… suburbia!

Our hero gets a pretty lousy welcome to the ‘burbs by… a Doberman!  Spidey shuts the pup up quick.

On the sidewalk, he runs into a tot on a bigwheel named Shana.  She asks if he’s a stranger… and, uh… kid, if you have to ask… Anyhoo, she offers up her trike for Spidey to get around the neighborhood… but, he turns her down… claiming, if she’s Shana… he’s going to make like Ka-Zar.  Let’s not think too deeply about that one, okay?  In a funny bit, he shoots his web at… nothing!  Ya see, there are no skyscrapers to swing from out here!  Spidey winds up in a tree… which breaks… nearly crushing poor Shana!

At this point, our man is confronted by a pair of nudnick suburbanites (hey, I can say that… I am a suburban nudnick).  The fella is ticked that Spidey broke his tree… the fella’s wife seems to just wanna feel up our hero’s butt!

After getting hassled (and felt up?) for a bit, Spidey webs them to the roof of their car.  He hops a lift on a passing bus to continue tracing-the-tracer.  The driver, upon realizing he’s got a rooftop stowaway, pulls over and demands Spider-Man pay his fare!  Welp, no pockets… no money, so Spidey’s outta luck!

In a pretty funny scene, we watch as Spider-Man just… walks… though a suburban neighborhood.  Love it!

He finally comes across a pair of Spider-Fans, in the form of garbage men!  They offer Spidey a lift on their truck… and, ya know what they say about beggars and choosers, right?

We jump back to Ron’s house, where he’s spending his day off doing a bit of laundry.  All the while, Spider-Man draws ever nearer to finding his tracer.  Ronnie discovers the tracer while tossing a load into the wash… and, upon realizing just what it is… stomps it to pieces!

Spidey was so close… yet so far.  Thankfully, ol’ Ron figures the jig is up… and so, he grabs a bunch of dirty dough, and decides to make a break for it… nearly running over our hero in the process!

Spider-Man fires a web at the back of Ron’s Volvo… but, unfortunately only manages to yank its rear bumper off!

As luck would have it, a taxicab happens to drive by.  In the suburbs?  Before Uber?  C’maaaaahn.  This driver doesn’t speak any English either… which, I guess we’ll allow.  Doesn’t seem like he’d do great business in this lilly-white neighborhood though.  Anyhoo, Spidey’s all “follow that car!” (which he thankfully doesn’t follow up with “I always wanted to say that”) and a chase… is on!

As the chase makes its way through the neighborhood, we catch glimpses of all our new friends… Shana, the creepy-couple, the garbage men, the bus… it’s like old home week!  Everything goes to pot pretty quick, we’ve got some fender-bending… and Spider-Man bounds over the trash truck and lands right on Ronnie’s ride! 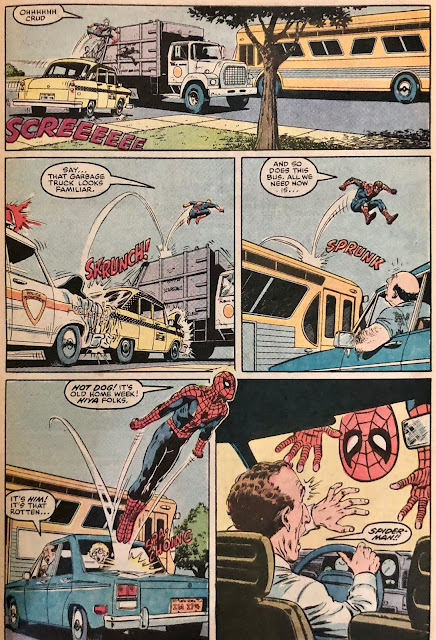 We wrap up with Spider-Man saving the day… or, at least catching the crook… as all the wacky suburbanites act… well, wacky… and suburban.  Spidey laments just how crazy it is… out in the ‘burbs!


Man… I love this issue.  Makes me really miss reading Spider-Man… it’s just too bad they stopped making Spidey comics all them years ago!  Err… a-hem.


This was just an absolute blast.  So much silly fun, making Spider-Man a bit of a fish out of water.  The gags, under a less skilled writer would have likely fallen a bit flat… but David manages to pull it off.  It doesn’t overstay its welcome… it doesn’t insist upon itself… it also doesn’t pat itself on the back for being clever, which I very much appreciate.


I really enjoyed that, upon arrival in Scarsdale, or wherever… Spidey just instinctively shot a web… expecting it to connect to a tall building.  That panel alone… is just a riot!  It’s like you can feel the realization hitting him as the sad little web-line unceremoniously plops down on the street.  So much fun.  Also, running into some weirdos… that’s always a good time!  What do suburbanites know from heroes in the city, right?  Bringing everything together at the end, as if it were an episode of Seinfeld was a lot of fun too!  Obviously worth mentioning, the art was pretty fantastic throughout!


If you haven’t read this one… and, I wager many of you have… I’d recommend doing so just as quick as you can!  If it’s been awhile since you’ve read it (like it had been for me), I’d say it’s definitely worth a revisit.  Peter David’s written plenty of Spider-Man (plenty of great Spider-Man, including my favorite Spider-Man story: The Death of Jean DeWolff!)… but it’s definitely a shame he didn’t get an sustained run on the flagship Amazing Spider-Man.