Time to check in with Nightwing… a feature that has a real good chance of sweeping in the polls for its entire run!  I mean, this is the penultimate chapter (for now), and he’s still riding the winning wave!

We pick up exactly where we left off… Cheshire has Nightwing pinned down, and is threatening to swipe at him with her poison-tipped fingernails.  Naturally, and expectedly, Nightwing is able to flip her off’a him.  She manages to twist her body enough to land on her feet… at which point, Dick takes a powder.  Jade laughs at his perceived cowardice, and decides to head home herself… confident that it won’t be long before they meet again.

Dick gives chase in a police helicopter… which, I dunno, feels a bit like overkill… but it gets the job done.  We rejoin Jade at home, where we can see that she is holding Roy hostage.  She taunts him with the fact that, though their daughter is just in the next room… he’s never gonna see her!

Just as she draws back, ready to strike at him with her poison-tipped nails, Nightwing burst through a nearby window!

Nightwing and Cheshire have a knock-down drag-out fight over the next couple of pages.  In the fracas, the chair where Roy sat gets destroyed, and, though still bound, he attempts to interject himself into the battle.

Cheshire swipes at Speedy, both slicing through the ropes that bind him… and cutting into his chest.  Remember, dem fingernails be poisonous!  She then jumps out the same window Dick busted in and skedaddles… without Lian!

We wrap up with Cheshire and that old man whose name I can’t remember.  When reminded that she left Lian behind, she coldly snaps back that, right now… she is not Jade, only Zuul Cheshire. 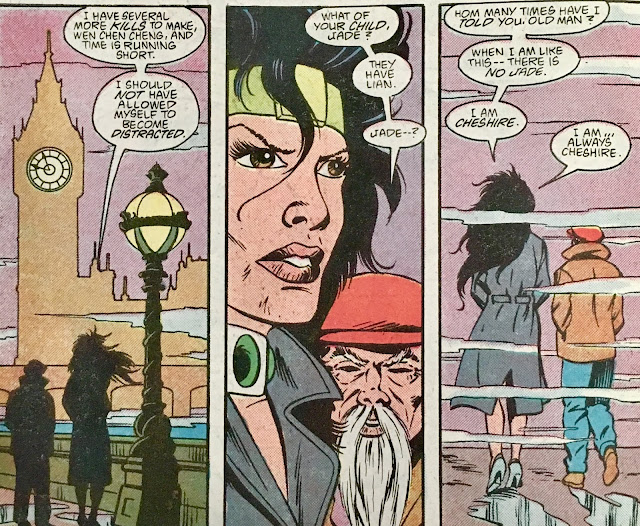 Another very strong outing for the Nightwing feature… though, one that leaves us with a few questions.  Like, why did Dick need a helicopter to follow Cheshire?  Was that the same helicopter Cheshire later escaped on?  Were there two helicopters on the same lawn?  Why would Cheshire abandon her daughter with the last fella she’d wanna leave him with?


I guess that’s all part of the “penultimateness” of this chapter, right?  We’re getting questions… and they’re questions (my silliness over the helicopteriness, excepted) that we wanna see answered!  This isn’t like that tepid Black Canary feature where the penultimate chapter was basically an expository dump just to give some context to the mysteries we had been reading about for the six weeks prior… this is actually building up quite well!


That said, there really not much more to say… we got a couple of very well done fight scenes, and a reason to come back next week!  Sometimes, that’s all we ACWers can ask for!