Well, here’s another series I’d put off due to my “what volume is this?” neuroticism.  Ya see, this is usually referred to as Superboy, Volume Four… but that includes the series’ New Adventures of Superboy, and Superboy: The Comic Book based off the syndicated television show (which would later become Adventures of Superboy)… making this volume technically the second to simply be called Superboy… and so, for the purposes of this blog… I’m gonna refer to it as Volume Two.


Yeah, I’m thinking too hard… but it’s kinda what I do.

We open with a retelling of Superboy’s origin, told in very dramatic fashion!  It was the world’s darkest hour… and all that jazz, when Superman was killed in battle with Doomsday.  Then, was lit a spark of hope… in the form of Cadmus Labs and their hankering for a hero via the magic of cloning.  Now the world looks to the skies to see… a very stylish (for the time… c’mon, you had that haircut back then too) young hero… Superboy!  It turns out, as if the cover wasn’t a dead giveaway, that we’re watching the opening credits to the pilot of Superboy: The Animated Series… along with the cast of this comic book!  We’ve got (a sick) Kon-El, surrounded by Tana Moon, Roxy, Dubbilex, and his agent, Rex Leech.

Tana takes Kon’s temperature… and finds it normal, whatever “normal” might be for a Krypto-clone anyway.  He blames his illness on breathing in volcanic gases, and doing battle with Brimstone with The Ray (hey, we read that one!)… though, certainly Roxy blowing cigarette smoke in his face ain’t helping matters either.  Dubbilex is dubious of Kon’s self-diagnosis… as he knows there are some clone-centric diseases that he may be suffering from.  Rex don’t have time for none’a this, however… he’s got a cartoon to watch!

In toon-town, we are introduced to a pair of very Peter Davidesque villains going by the names Lock and Lode.  They have mistakenly broken into LexCorp Tower… thinking it to be where super agent Rex Leech lives on a count that it’s shaped like a giant letter L.  They argue a bit… and throw a pair of “rent a cops” out the window… likely to their inky celluloid demise.

At “stately” Leech Manor, a very svelte Rex is conducting business with Police Commissioner Henderson… and, this is pretty neat.  In the comics Henderson is a white dude, but in Superman: The Animated Series, he is a black man… so, here, he’s a black man.  What a fun touch!  Dubbilex makes his toon-debut as Rex’s loyal (and wacky) telepathic D.N.Alien Butler… which is a hoot.  Rex’s daughter Roxy is also introduced… as a mass of primordial slime!

As you might imagine, these portrayals are not well received by their real-world inspirations.  Dubbilex doesn’t take kindly to being made to look like a silly servant… Roxy damn sure doesn’t like the idea of being a puddle of ooze… while Superboy’s just annoyed he hasn’t shown up yet!

Back onscreen, Lock ‘n Lode arrive on the scene and easily neutralize both Henderson and Dubbilex.  In the skirmish, the former’s pistol goes flying… crashing through the globe that “held” Roxy’s drippy oozy form, spilling her all about the room.

We shift scenes and finally meet, the man of the hour… Superboy!  He’s hanging with a young lady at his Super-Grotto… which is sorta like the Batcave, only grotto-ier.  As he shows her his mysterious mineral spring, he notices… well, she notices… some slime dripping in from the ceiling.  Superboy knows that can only mean one thing… Rex has been attacked by super-assassins!

He bursts through the ceiling into the Manor above (way to give it all away, kid!) and finds Dubbilex and Henderson cuffed and seated… and Rex laying spread on a table while a laser pendulum swings above him… growing closer with each pass! 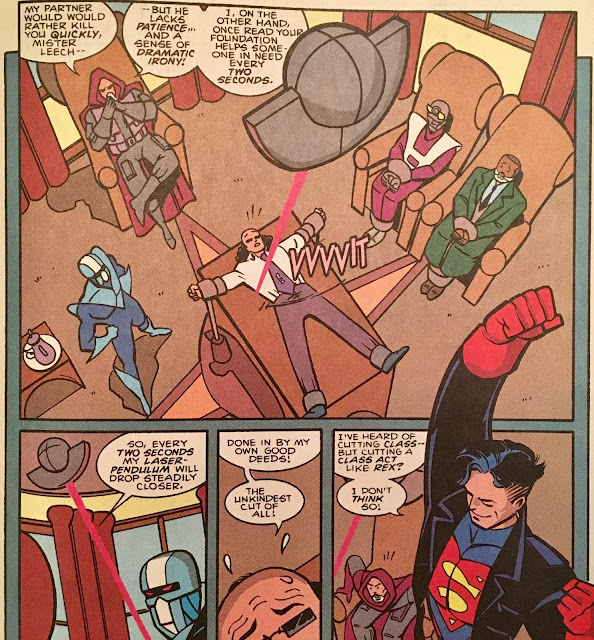 Superboy gets to fighting… and talking about his tactile telekinesis.  Man, I’d love to see a scene of Kon and Mercury from the Metal Men hanging out.  Liquid at room temperature versus tactile telekinesis… ay yai yai.  Everything looks to be going fine, when Superboy finds himself trapped in a super-hard resin… that the baddie lied and said was knock-out gas.  What a jerk!

It doesn’t prove to be too detrimental to the Metropolis Kid… just momentarily slowing him down.  He breaks out of the crud… just in time to be ensnared in Lock’s whip.  Lode steps in and begins applying the magnetic pressure to it when… Rex, now freed from the trap shoots the baddie in the shoulder.  Wow, what kinda violent cartoon is this?  Police thrown from skyscrapers… good guys using guns… blood (!) wild stuff here!

The day is saved… and we learn that it was all due to Rex’s laser-reflective tie-clip (wonk wonnnnk).  Dubbilex enters to interrupt Kon and Rex’s… soup feast (?) to inform them that something’s going on in the Super-Grotto.  It turns out that Roxy has evolved… into a fungus (wonk wonnnnnk, again).

Back in the real world we wrap up with Kon excusing himself to head to the fridge… and with a TH-UNK, he hits the floor.  Tana Moon runs in to see him sprawled out… and fears him to be dead!


Well, this was a lot of fun.  Looking back it’s hard to believe this issue came so early in the run!  I’d figure a story like this would’ve come a bit later on… but, here we are!  Such a fun concept to play with… if I’m remembering right, DC did something similar in a later issue of Guy Gardner Warrior.


As much fun as this issue was… there really isn’t a whole lot to say about it.  We see that Rex Leech’s cartoon self is a suave dude, rather than a frumpy con-man… and he views himself as the “real” hero.  It’s silly, and further shows what kinda goofball jerk he is.


I don’t feel like the cast is established enough to have these “amped to 11” cartoon versions to be as funny as they’re meant to be.  Of course, reading this well after the fact, after having a better idea of who these characters are… it’s easy to have the proper appreciation.  It’s difficult to say how I would have received this had I read it in 1994.  I’m sure I’d have dug it… but, maybe not as much?  I dunno… my Kon-El mileage was a bit different back then.  Too be honest, he annoyed me… and I was hoping he’d be temporary.


The non-cartoon story here is focused on Superboy’s illness… which everyone but Dubbilex writes off as his just being under the weather.  I can’t remember what becomes of it… but I’m guessing it’s taken care of within the next couple of issues.  The story within a story gives the Kon-is-sick bits some time to organically breathe… and not shove it in our faces.  His collapse at the end was actually a bit of a surprise, simply due to how nonchalantly it was treated up to that point.  Really clever storytelling here… a silly cartoon framed by a serious situation.  Great misdirection.


Overall… this is one I’d definitely recommend.  Though, I would posit that a basic familiarity with Kon’s Kast would yield a better appreciation for the exaggerated animated takes.  The art alone, however, makes this more than worth a read.  Grummett’s (relatively) realistic take contrasted with Parobeck’s “lighter” animated style comes across great!  For your convenience, this is available digitally.