When folks think of important creative figures in Legion of Super-Heroes history, one name that is often at the very top is Paul Levitz.  I figure for this installment of “Learnin’ the Legion”, we’ll go back to what I believe is his first Legion issue!

We open during Wildfire being sworn in as new leader of the Legion of Super-Heroes.  A very angry Superboy bursts onto the scene, claiming Wildfire cheated him out of the position… because, he had more votes!  Things nearly become physical as this entire confrontation is being televised on WGBS.

As Superboy is being restrained by Mon-El and Ultra Boy, Dream Girl and Lightning Lad inform him of a change in the Legion Constitution… since Superboy (and Karate Kid, evidently) are only part-time members, they are unable to fulfill the role of Legion leader.  Kinda begs the question why so many people would vote for a part-timer, right?  Superboy did say he had the most votes!  Anyhoo, he stomps out in a huff, kvetching at Shadow Lass on the way down the hall.

Hours pass, and the Legion is alerted to their first big threat under Wildfire’s leadership… the Resource Raiders are attacking a dam on Earth!  It looks like this crew is widely known as plundering resources throughout the galaxy.  The Legionnaires swoop into position, rescuing the nearby civilians…

… before taking aim at the Raiders’ own odd flying saucer.  Lightning Lad and Shadow Lass hold the spinning disc at bay while Wildfire breaks off to attend to the busted up damn.  Before he might give it “one good blast”, Superboy flies in and takes the brunt of it.  After throwing the Resource Raiders into orbit like a Frisbee, Superboy explains that the dam was coated in tiny explosive powder, which if ignited would’ve destroyed the entire valley. 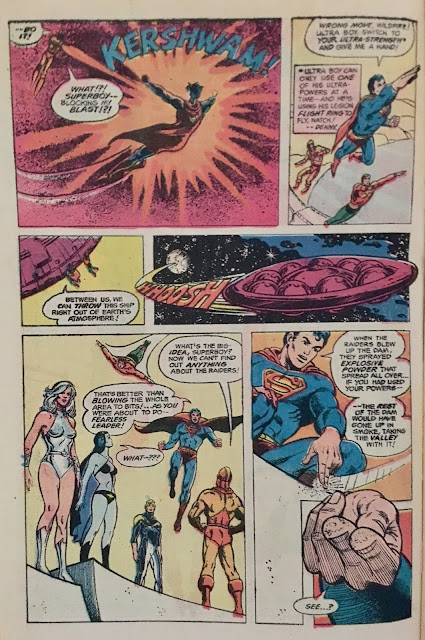 Later on, in the Legion Lounge, Ultra Boy claims that there was no powder on the dam… otherwise he would have been able to see it with his Penetra-Vision.  Shadow Lass doesn’t want to think that Superboy may be trying to set their new leader up… to which Dream Girl thinks there might just be more going on here than meets the eye.

We shift to the Legion’s Hall of Uniforms, where an embittered Superboy skulks in the shadows.  He comes across his bounty… a Wildfire costume, just as the real-deal Wildfire shows up.  A brief skirmish ensues, ending in the darkness.  Once the dust settles… Wildfire leaves the room… or is it?

It isn’t long before the Resource Raiders (I gotta stop typing Rescue Rangers) return to pillage and plunder, and Wildfire summons the Legionnaire to battle stations.  The team questions how Wildfire could have seen the Raiders, as they were hiding behind satellites… without penetra- or telescopic vision, this shouldn’t be possible!  Wildfire simply replies that he “has his ways”.

The Legion attacks the Raiders… and Wildfire is almost immediately blasted to atoms!  At that very moment and to everyone’s surprise, Superboy shows up!

As Superboy enters the fray, and helps the team easily take out the Raiders, he explains that the reason he’s been such a jerk is because he saw that the Legion computer predicted whoever was the new leader would be blasted and killed during their first mission… and he intended to (literally?) take that bullet!  During his fight with Wildfire in the Costume Room, Wildfire convinced him that he would have a better chance of surviving the (Kryptonite-laden) blast.  Wildfire slips into his spare costume, hoo-ha, the whole world works.  Everything’s cool in Legion-land.

Our back-up story provides us with an “unknown tale” from Legion history.  It occurs on a spaceship where Legionnaires, Timber Wolf and Sun Boy are escorting Ambassador Relnic on a diplomatic mission.  Timber Wolf believes the intergalactic mass-murderer Tseln of Thaun is also on board… and despite Sun Boy’s arguments, set out in pursuit.

In giving chase, Timber Wolf grabs a lone drape off the wall, and hurls it at his bounty… which turns out to be fellow Legionnaire, Princess Projectra!  It’s really unclear just what the hell is going on here… like, I think he threw a drape at her… but it creaked when it came off the wall… like maybe it was a piece of the wall itself… but that would probably have taken Projectra out, right?  I dunno…

Anyhoo, Sun Boy and Relnic catch up, and we hear more about the mission of diplomacy.  Relnic is to head into the Dominion Worlds to avert a pending war with the Dominators.  We also get some exposition on Tseln.  The Legion have followed him across 12 planets, and still haven’t gotten a good look at his face.  It’s said that the baddie is quite superstitious and always kills using a ceremonial knife.  Relnic attempts to reason with Timber Wolf to settle his tea kettle… as it would be most unfortunate if the Dominators were to find out that he was secretly being escorted by Legionnaires.

Timber Wolf retires to his room, unhappy with having to wait… while Relnic, Sun Boy, and Princess Projectra have themselves some dinner… and, as it turns out, a show!  Suddenly the main area of the ship is filled with flame as a pair of smilin’ demonic beasts make a (very) dramatic appearance!

The devilish-duo starts rattling the chains of the passengers when, wouldn’tcha know it, after some very comics-code-friendly threats, the very superstitious Tseln of Thaun shows his face… and ceremonial blade made of Mithril Silver!

Tseln attacks, but gets kayoed for his troubles.  The Devil-dude vanishes as ship security descends on the mass-murderer.  Turns out the devil was (I think) Timber Wolf under a Princess Projectra projec-tion, and the flames were courtesy of Sun Boy.  The whole ordeal is written off by the captain as the “ship’s entertainment getting out of hand”.  We wrap up with the Legionnaires whispering to each other about having stopped a mass-murderer without Relnic even realizing it.  Wonk wonk wonkkkk.


While the first story wasn’t terrible, I really found it hard to believe that Superboy would act like such a brat.  I mean, would the Legionnaires not listen to him if he spoke to them about his findings in private?  Did he really need to cause a televised Legion-incident by storming in on the swearing-in ceremony?  Did he really plant gunpowder on the dam?  Did it really matter that whoever was in charge was going to be blasted by the Raiders?  Seems like Wildfire would’ve survived without Superboy’s assistance, right?  I mean, buddy’s an energy-type being, right?


The (brief) mystery of who is in the Wildfire costume was decently done, I suppose… but, if Wildfire was always Wildfire… how could he suss out the Raiders if they were hiding behind satellites?  I mean, that was a red herring to make us thing Superboy was under the mask… but isn’t really explained away, unless I’m missing something.  Perhaps Superboy tipped Wildfire off after they put their plan together?  Was there a plan?  Oof.


Even with all of my misgivings/confusion, I gotta say… I enjoyed the first story a whole lot more than the back-up.  This one was just a chore.  This is the kind of story that always scared me away from the Legion… just three random Legionnaires in an out-of-costume adventure.  I mean, I can hardly identify some of these characters in costume… in their civvies, I’m totally lost.  That isn’t to say there wasn’t a fair amount of exposition… and by “fair amount” I mean a TON.


I’m still unclear on what it was that Timber Wolf through at Princess Projectra… was that all part of an elaborate act to smoke the baddie out, or did the “act” start with the devil illusion?  Why couldn’t Relnic know what they were doing… I mean, he already knows his “bodyguards” are really Legionnaires, right?  Did he really need deniability?  Is he so dense that he wouldn’t realize that, when the baddie gets captured due to a mixture of an illusion and flames, that perhaps Sun Boy and Princess Projectra had a hand in it?  I dunno…


The art for the first story was pretty great.  I was a bit disappointed initially that Mike Grell wasn’t on art after seeing his work on the cover (along with Superboy’s man-sized sideburns!), but Sherman put in some excellent work.  Nasser’s work in the back-up was a bit sketchy, but not bad at all.  I definitely prefer Sherman’s though.


Overall… perhaps not the best initial outing for Mr. Levitz.  From what I hear (and what little I’ve read) his run with these characters throughout the Bronze Age and beyond is pretty legendary.  Believe it or not, the first Legion of Super-Heroes story I (attempted to) read, was The Great Darkness Saga.  That would kinda be like reading Crisis on Infinite Earths as a brand-new DC fan (which I also did some 20 years ago).  I look forward to eventually giving Great Darkness another look when I have a better grasp on the characters and their world… I’m sure I will have a much better appreciation for it by then.

Reggie and Me – The Comics Code Authority